Tina: Hello, Mark. I’m looking forward to chatting with you today and kicking off our inaugural post for our series, “Tell Me About It.” I’m excited to share our takeaways from the Super Bowl ads and the implications for PR.

Mark: Yes, I’m thrilled to partner with you on this series.

Every year following the Super Bowl, there’s a crush to be the first to evaluate the ads.  We, on the other hand, prefer a methodical approach that offers perspective and reflects careful consideration (plus, we needed to wait until Bruce was vindicated before putting pen to paper).

As we know, Super Bowl advertising is a spectator sport all its own, with companies and brands pouring superstar money into making a splash during one of the world’s most watched events.  This year’s ads confirmed that the most important cultural force on Earth that night was not the Super Bowl but “Saturday Night Live.”  Current and former SNL cast members dotted the event and, if you add former SNL hosts to the mix, Lorne Michaels must be the most validated person on our planet.

Let’s dig in. First, thanks to Signal AI for providing us with the media content analysis.

Compared to most mass-market advertising, public relations in the form of media coverage boasts an extraordinarily slow decay rate.  Whereas most of the ads have faded from memory—if you even remembered them at all the next day—media coverage of the ads lives on search engines for decades.

Tina: Nearly all organizations received positive coverage for their Super Bowl ads, which is good news for the advertisers. This year’s cost was $5.5 million for 30 seconds. It’s the only event I can recall when people look forward to an ad.  But let me begin with my least favorite ad: The Cheetos ad where Mila Kunis hides in her closet with orange powder on her fingers and face, denying she was eating Cheetos. Ashton Kutcher would have never lied about eating Cheetos so why should she? That one really stuck in my craw and her orange fingers near the white walls stressed me out.

Mark: First, let’s acknowledge that $5 million for 30 seconds of airtime is more than even Fortune 500 companies invest in their annual PR budget. Oddly, one of my favorites was among the most widely criticized:  Oatly’s “No Cow.” Something about it stuck with me.  Maybe because even though I can’t play the piano or sing, I can probably play and sing that.

Tina: I’ll take your word for it. So, let’s get to the overall themes:

Tina: Watching all the ads I thought, “Wait, are we still living in COVID-19 times?” It seems very few of the commercials showed people social distancing or wearing masks. Maybe they want people to take a break from what’s happening to in their day-to-day worlds. It’s been a long year.

Mark: I don’t know about you, but the last thing I want to see in an ad is my day-to-day life!  I was very happy to visit Norway/Sweden with Will Ferrell and sit on the basement couch with Wayne and Garth. Anything to not think about Covid life! Give me fantasy every day of the week! And I would much rather be wherever Tracy Morgan is than where I am. 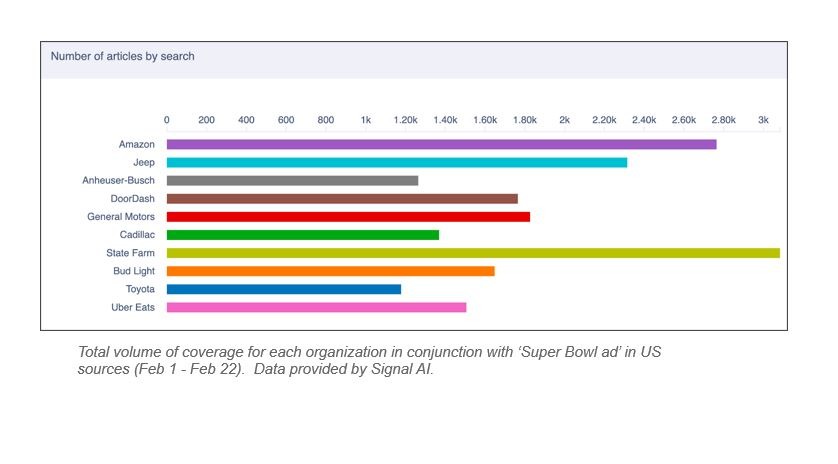 2. Ads should tie to the brand.

Mark: In “Confessions of an Advertising Man,” Madison Avenue pioneer David Ogilvy wrote, “Advertising is not an art form, it’s a medium for information, a message for a single purpose: to sell.”

Surprisingly, there was very little selling going on.  In my opinion—and this is a challenge to Super Bowl marketers every year—there was very little to spark an association with any brand. There’s a temptation among advertisers to simply entertain…I’m not sure that’s good enough.  What’s more, smart marketers extend the life of their advertising investment by applying public relations, promotions and other forms of marketing beyond the original ad to derive every benefit on their sizable investment.

Tina: Yes, it always strikes me when companies spend a significant amount of money on an ad, but it doesn’t connect to the product in the consumer’s mind. Take for instance last year’s Jason Momoa ad where he took off his muscular arms, legs and hair to reveal he’s just a scrawny man. I bet I could walk up to 10 people on the street and 9 out of 10 would have no idea who the company was (It was Rocket Mortgage). This year’s ads featuring Tracy Morgan from “30 Rock” and SNL tied better to the brand.

Tina: Compared to last year, there was more racial diversity in the ads. Last year, there was only a couple of examples of diversity—all featuring entertainers like Lil Nas X—featured in commercials. And I use the word “entertainers” intentionally because the racial diversity of everyday people or the title actors was largely ignored. This year was much better—more people of color were the stars of the commercials, rather than being bystanders.

Mark: Yes, it does seem that brands were more intentional about diversity this year in their Super Bowl ads. I’m hoping that will continue moving forward.

4. Celebrities were front and center.

Mark: Nine of the most visible 10 advertisements featured celebrities. Anheuser-Busch did not have celebrities, which is not new for them.  And it seems like as long as there is Super Bowl advertising, there will be life after death for people associated with Saturday Night Live.

However, to the previous point about extending the life of the commercial, there’s very little if any celebrity activity leveraged through public relations beyond the advertising reviews/rankings that we’ve all seen.  This surprises me because our research on the relative financial returns from public relations shows again and again that positive and visible media coverage lifts all boats: the ads are more effective, the price promotions generate more sales and so on.

Tina: I thought there was also a lot of nostalgia for the ‘90s with commercials featuring Edward Scissorhands, Jason Alexander from Seinfeld, and Wayne’s World. The weirdest one for me was the Cheetos “Flat Matthew McConaughey” ad. That one will haunt my nightmares. It reminded me of the Jason Momoa commercial last year where he took off his muscles and hair. No, thank you. Hard pass.

Mark:  Agreed.  I didn’t get that ad at all.  And “haunting nightmares” was certainly not among Frito-Lay’s objectives.  However, he did resemble a rather floppy two-dimensional human Doritos chip, so there’s that.  But I wouldn’t be surprised to learn that many marketers prefer “a memorable commercial” over a “likeable commercial.” 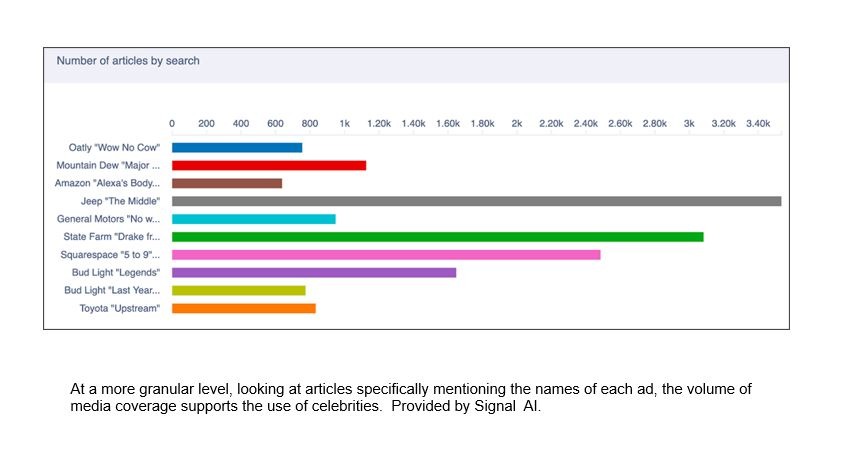 This was one of the few ads that generated negative sentiment.  What is more, I can’t think of a public relations application for that commercial but that can be said about most of them.

Tina: Overall, I just found it irritating. My tolerance for the Super Bowl with all the noise and commentary is not as high as the average sports fan. So that ad just sent me over the edge and to the snack table.

Mark:  And that may explain what motivated advertisers all along: more snacking.

Tina McCorkindale, PhD, is the CEO of the Institute for Public Relations.  Mark Weiner is the Chief Insights Officer for Cognito and author of “PR Technology, Data and Insights,” available now on Amazon.